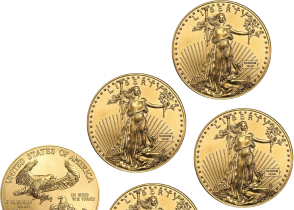 The Royal Canadian Mint is one of the most prestigious gold bullion mints in the world. They were the second major country to start producing gold coins after it became legal to own gold in the United States in 1974.

However, one of the things that set the Royal Canadian Mint apart at the time, was that they produced a pure gold coin, as opposed to the only main competitor in the marketplace at the time, the South African Krugerrand.

The Royal Canadian Mint used the iconic image from their flag to emblazon the coin and this coin, the Canadian Gold Maple Leaf, became the most popular gold coin in the world by the mid-1980s.

However, over the years, the Royal Canadian Mint has expanded its gold bullion coins offerings by producing specialized or limited mintage gold coins with images primarily of wildlife and nature.

Starting in 1979, the Royal Canadian Mint produced the Canadian Gold Maple Leaf. Initially, from 1979 through November 1982, only a 1 oz size was produced.

In addition, in that initial production period, the coin was only manufactured to a guaranteed minimum fineness of 999, meaning a minimum of 99.9% gold.

Then, in November 1982, the Royal Canadian Mint increased the minimum fineness standard to guarantee at least 9999, or 99.99% pure gold.

At Pacific Precious Metals, you can get 2022 oz 1 Gold Maple Leaf or a random year's oz 1 edition, with the same weight and fineness.

Finally, starting in 2014 when the Royal Canadian Mint introduced their Bullion DNA program, they added a 1 gram gold maple leaf to their list of Gold Maple Leaf series.

By the mid-1980s, the gold maple became the most popular gold coin on earth.

Part of the reason was that from the late 1970s, there was a growing unease among American gold investors regarding the apartheid form of government of South Africa, which for the better part of the 20th century had been the world's largest gold producer along with their flagship gold coin, the Krugerrand.

But it wasn't the only reason.

The fact that the Royal Canadian Mint had decided to produce a gold coin that was pure gold was also something novel.

The brilliant yellow of gold had captivated humans for millennia, and it spurred the adoption of this 1 oz Canadian gold coin as the de-facto standard among hard asset and gold bullion investors.

The official bullion series of this coin features one and the same design on the obverse and the reverse, with slight changes that were made to the former.

The profile-portrait of Queen Elizabeth II has three popular designs featured on the obverse of the gold coins:

The reverse of the gold coins that belong to this edition depicts the iconic image of the sugar Maple Leaf, Canada's national symbol. This archetypal design has been used since 1979 when the coin was first introduced.

Like its US gold bullion coin counterparts, the Gold Eagle and Gold Buffalo, the Canadian Gold Maple Leaf is legal tender.

Of course, no one in their right mind would use a 1 oz gold maple for its face value of a 50 dollar Canadian gold coin.

This leads us to answer another common question posed by gold bullion investors - What is the real value of a gold coin?

Generally, everyone will tell you that the heavier the coin is, the more value it has. But is it always like that? Are there some other factors involved, such as the rarity and purity of the coin?

In order to answer these questions accurately, we must delve into the matter a bit further and observe what every seasoned investor would tell you.

How much is a Canadian Gold Maple Leaf Coin worth?

As we indicated in the sections above, the gold maple is made in a variety of sizes/weights so the value of any maple leaf will depend upon its gold content as well as the spot price of gold.

This is no different than that of any gold bullion product, be it a gold bar or a gold coin.

Typically, if you are dealing with a legitimate gold dealer, like Pacific Precious Metals, the amount you spend to buy a gold maple leaf will be only about 1-2% above the retailer's cost to buy it from the Royal Canadian Mint's distributors.

The gold bullion market is one of the most efficient commodity markets in the world so excess profits are very rarely available for gold dealers.

Trust, price, and testing are what separate one dealer from the next. When you sell your pure gold maple leaf coins, you can expect to get close to or even slightly above the spot price of gold from dealers as reputable as Pacific Precious Metals.

The Canadian Gold Maple Leaf is IRA eligible as well.

This means that you can save money for retirement with this item on your Individual Retirement Account.

When you do this, you're taking advantage of various tax benefits, such as tax-free growth potential. In the long term, this equals the accumulation of your wealth and valuable assets.

What other Canadian gold bullion coins are available?

The Royal Canadian Mint has produced a variety of other gold bullion coins over the years.

Initially, they made some special edition Gold Maple Leaf coins that were made to a minimum purity of 99999, or 99.999% pure gold. However, other coins have been produced as well with different designs.

In 2014 the Royal Canadian Mint started a series of gold 99999 coins called "Call of the Wild", which depicted various native Canadian (all of which are also native to the United States) animals in the act of making their natural "call".

These coins are individually packed in a sealed blister package that protects the coin and gives the gold bullion investor a more secure way to store gold coins without the risk of damage.

Where to buy Canada Gold Coins?

Canadian Gold Maple coins can be purchased readily from most dealers in the United States.

Pacific Precious Metals stands out among them as we provide fully insured shipping when you want the convenience of ordering online and the ease of taking delivery at home.

However, Pacific Precious Metals also offers the security and convenience of picking up your gold coins in person at one of our local storefronts in the San Francisco Bay Area.

When picking up in person, we are always happy to demonstrate that the gold we deliver to you is genuine using a variety of non-destructive test equipment.

Online-only players can not offer the same peace of mind when you want to buy gold. So, add a beautiful gold bullion coin to your shopping cart today.

You can find the price of Canadian gold coins on our website where we update the Canada gold coins price every minute.

The process is very simple:

In case you need our assistance at any moment, we kindly ask you to send us a note, and our team of experts will reach you at the email address that you provide.

The Royal Canadian Mint (RCM) introduced an anti-counterfeiting technology in 2014 in the never-ending battle with counterfeiters.

This program, which Pacific Precious Metals is a proud participant, uses a micro laser-etched image of the maple leaf with the last two digits of the year at the center of the micro image on the coin surface.

These micro, laser-engraved images are unique to each coin.

This image is then transmitted to the RCM where they compare that image to the images of all coins in their database.

Once matched, the RCM returns to the computer in our office, while you are standing there, that the coin was in fact produced by the Canadian Mint.

The 1 oz Gold Maple Leaf version has a rich and colorful history, and it's what investors nowadays most commonly opt for its great demand and value.

Before you go, check out our silver and platinum Canadian coin collections. You'll see that their national symbol dominates the fare here, too, but there might be some other interesting choices that will catch your attention.

Reach out to us

Pacific Precious Metals is at your disposal for all possible queries and requests - don't hesitate to leave us a note, or call us directly at 415-383-7411. Consultations with our precious metals experts are absolutely free, and you can get all your questions answered.

Furthermore, visit our stores inSausalito, Fremont, Palo Alto or Walnut Creek and experience the quality service Pacific Precious Metals is known for in the first hand!