The Slapdown - Small investors got slapped by the bullion banks in the past 3 days - What’s next? 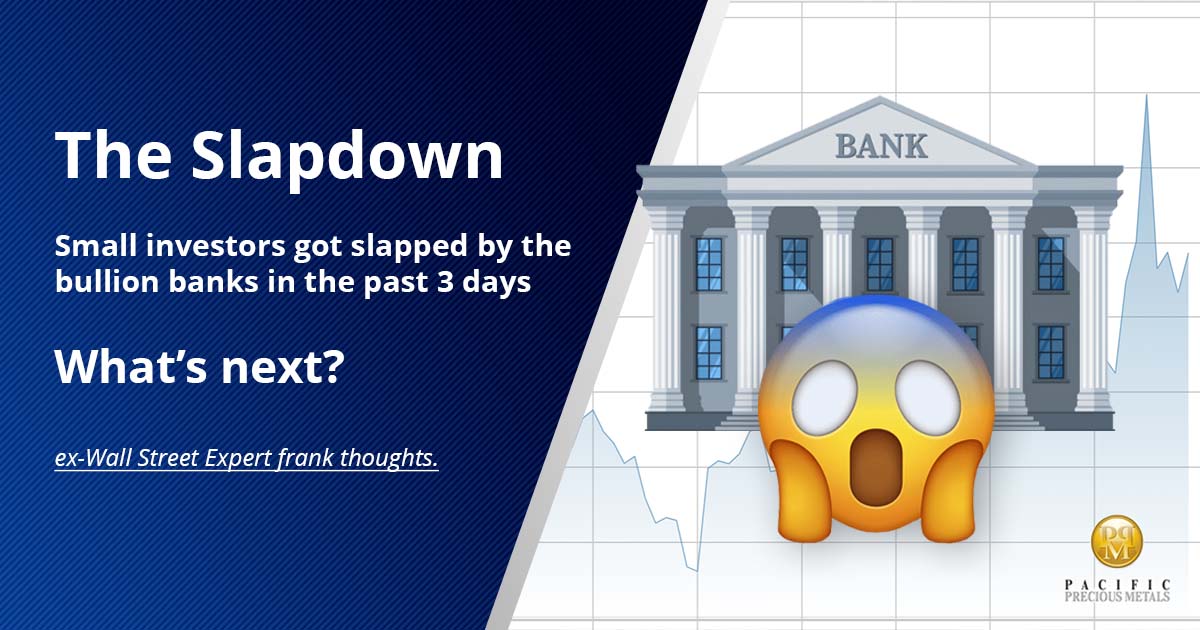 Following up on our post from Monday where we talked about the prospects of silver continuing to go higher. We thought there might have been a possibility that silver could have run further but clearly thought that the /reddit crowd were not playing against the same players when it came to silver. And those investors got schooled. Don’t mess with JPMorgan Chase, Goldman, the other bullion banks, The CME Group (where all futures are traded), nor their backer, The Federal Reserve.

A lot bigger issues would have to transpire in order to get those entities to fold and let the silver or gold markets get away from their control. Corrupt? Almost certainly. Unfair? Definitely. But it’s not like this is a new phenomenon.

Some comments that I have made to countless gold investors over the years. If anyone can point to anything below that is inaccurate, please send me an email to: dbarrett55@gmail.com

Gold and silver prices are the only two commodities that I am aware of where the underlying physical demand has almost NO AFFECT on the price. Why?

These are not the only drivers, but they are certainly some of the main ones, in my experience. Notice that in that list, I did NOT list physical demand or physical supply. Just look at what happened over the past month, and particularly in the past week.

Event: Early January. Wholesalers start selling out of gold products and delivery starts taking on future production and deliveries from the various manufacturers. Delivery times get extended to 1 week out or so.

The drop in price fuels more demand. But the price does not respond at all. Over the course of the next couple of weeks, demand continues to increase. Silver demand also increases dramatically. Silver price trades sideways within a $1 or so range. Supply is still constricted and delays start to climb near the last week of January. Gold and Silver Prices trade basically sideways.

Then news that silver is in the crosshairs of the /reddit subgroup /wsb gets picked up by the media.

Silver demand for physical silver explodes higher. Futures prices start to respond in the anticipation (maybe a better word is “hope”) that the same thing will happen to silver as happened to GameStop.

Physical demand for silver increases between 10-30 times on January 31 v a normal Sunday for many online and/or brick and mortar retailers of silver bullion.

When electronic trading starts on Sunday afternoon, silver prices gap up by 8-10%. The price even eclipsed $30 at one point on Monday.

But, then came the close of regular trading on Monday. The CME group increased margin requirements on silver futures by 18%. At that point, selling of futures started. Physical demand was still coming into retailers strongly. But the silver price kept declining. I will note that at that point, no one had any silver left. Not the retailers, not the wholesalers. Premiums on physical silver disconnected from the futures market. They are still disconnected today.

For example, silver eagles were selling for a little over $5 a coin over spot at the end of last week. Now they are $10-13 over spot. The same trend is in place for all other silver products. Gold also has higher premiums than last week, but its not as stark an increase. The US Mint notified its authorized wholesalers that everyone would be on allocation (i.e. reduced supply). The Canadian Mint is a basket case given their draconian shut downs due to COVID fears. Swiss manufacturers like PAMP Suisse and Valcambi continued steady supply but delivery times were 3-4 weeks out due to demand increases.

Likely a period of consolidation with a good chance the price recovers a little. Most technical indicators are in way oversold condition.  The simple fact that I said that probably means it will move dramatically higher or lower. My track record of predicting the short term price is 50/50 at best. So flip a coin. However, like I alluded to in my last piece, the bigger issue is inflation boiling under the surface due to the combination of massive fiscal deficits and subsequent monetization of that debt by the Fed. I fully expect to see significant price inflation later this year in consumer goods and services. We already see it in stock prices, home prices, used car prices, and to an extent in commodities. When inflation takes hold, the Fed will likely at first ignore it and then be unable to contain it.

If you don’t like the current state of the world, both financially and geo-politically and expect things to get worse, it’s a good time to protect some of your wealth in #gold and #silver.

Dan Barrett is an ex-Wall Street (9 years), turned entrepreneur in the bullion industry for over a decade. Part owner of a physical bullion dealer in the San Francisco Bay Area and an owner of a software company making point of sale systems for the bullion and coin industry. He is an avid reader of macroeconomic theory and favors Austrian economics. Always looking to learn something new or gain different perspectives. Feel free to reach out. dbarrett55@gmail.com