Gold, Markets, and the Corona Virus 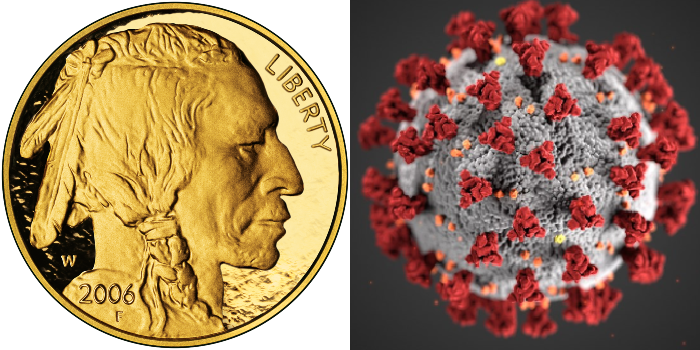 It’s been a hectic couple of weeks. Physical demand for precious metals has sky-rocketed. I’ve seen this rodeo before and it's playing out exactly the same way as before:

That is where we are today. The one thing I can say is that it is different this time. Neil Howe (The Fourth Turning. book) might be right. Cycles and human behavior have not changed for thousands of years. Our technology has, but our nature has not. We are on the verge of a major structural change in the way society operates, views, and organizes itself.

In my opinion, despite the convenience of electronic money, gold will continue to shine over the next few years. Why we as humans picked a yellow colored metal as a store of value and money is still astounding to me.

The Corona Virus is the trigger, not the cause.

I suspect that 95% of politicians will use the corona virus as an excuse to why they should never be held accountable for their poor judgement and desire to remain in power. We are likely headed, unless some miracle happens, for another recession. Yes, the Corona Virus accelerated the onset. But if it wasn’t the corona virus, it would have been something else sooner or later. Saying that, we were in one of the longest expansions on record thanks to the Fed, BOJ, PBOC, ECB, BOE, BOC, RBA, etc for allowing the banks to create money at a rate that kept everything moving higher. It works until it doesn’t.

We have been seeing signs of recession for a year or more now. However, the banking system has been growing M2 at a rate that would make it very difficult to fall into recession, particularly in the past 6 months. Printed money has to find a home. Usually in the pockets of the 1%, but some of it trickles down to the rest of us. Those on the bottom rung get almost none of the benefit. The Gini Coefficient grows. The corona virus has changed people’s behavior. It’s not something that printing money can affect to a significant degree. Wall Street (full of incredibly smart people) understands that and that is why the 100 bps cut in the target Fed Funds rate on Sunday was basically meaningless. It’s like having another shot of alcohol after already consuming 15. It won’t have a material effect on your drunkenness. You have to stop drinking, endure the hangover, drink lots of water, rest, and get as far away from the people giving you free shots as possible.

Because gold is part of the markets. And when markets fall like they have been falling, so does gold (and silver, and copper, and oil, and etc…..). But gold will catch a bid. Sooner rather than later. Despite the Fed trying to say that Gold isn't money (see this video), it is. But it’s also an asset and commodity. So the Fed is also partially right. So when markets implode like they have been doing for the past couple of weeks, gold futures will get sold along with everything else. Hence gold at ~ $1500 today. It’s that simple. Once the massive selling abates, gold, in my opinion will reassert itself on its bull run and will soon enough hit new all time highs, in terms of dollars if not purchasing power.

The Physical Gold and Silver Markets

With the sell off in both silver and gold, physical demand has skyrocketed. It was only a few weeks ago that, for the most part,  we were in a multi-year environment where there were more sellers than buyers in the physical market (moving the opposite direction of the futures). That changed with the implosion of the markets. Particularly in the past couple of weeks. Just like the supermarket shelves getting emptied, the stock of excess inventory in all the big wholesaler’s vaults have been emptied. Wholesalers in the past few days have moved their pricing up three times. This is when they can make hay. No one in the market feels sorry for them or the retailers that sell gold when the price drops and volumes dry up...making the business almost impossible to earn money in….but that is the case for EVERY commodity business. Oil, gold, copper, soybeans, wheat, iron ore, shipping, etc. You print money in tight markets and fight to stay alive in loose markets. We are in a tight market now. I suspect that although it may loosen somewhat in the next 6 months, it will be tight for a while. This will happen even if the spot price of gold strengthens and goes to new highs. But the cost to enter a position, despite the increases in premiums v the spot price is lower today. That is good news for investors in precious metals.

Two months ago, there were about 3 buyers of metal for every 7 sellers. Now its about 20 to 1. That is herd behavior defined. Expect premiums on precious metals to increase further in the next few weeks before falling back to historic norms. Regardless, I believe it’s a good time to be a buyer and long term holder of precious metals. Take advantage of the selling in the futures market to lower your overall cost of building a position. Remember, a good reason to own physical gold or silver is the elimination of counter-party risk. You don’t get that owning futures or an ETF.