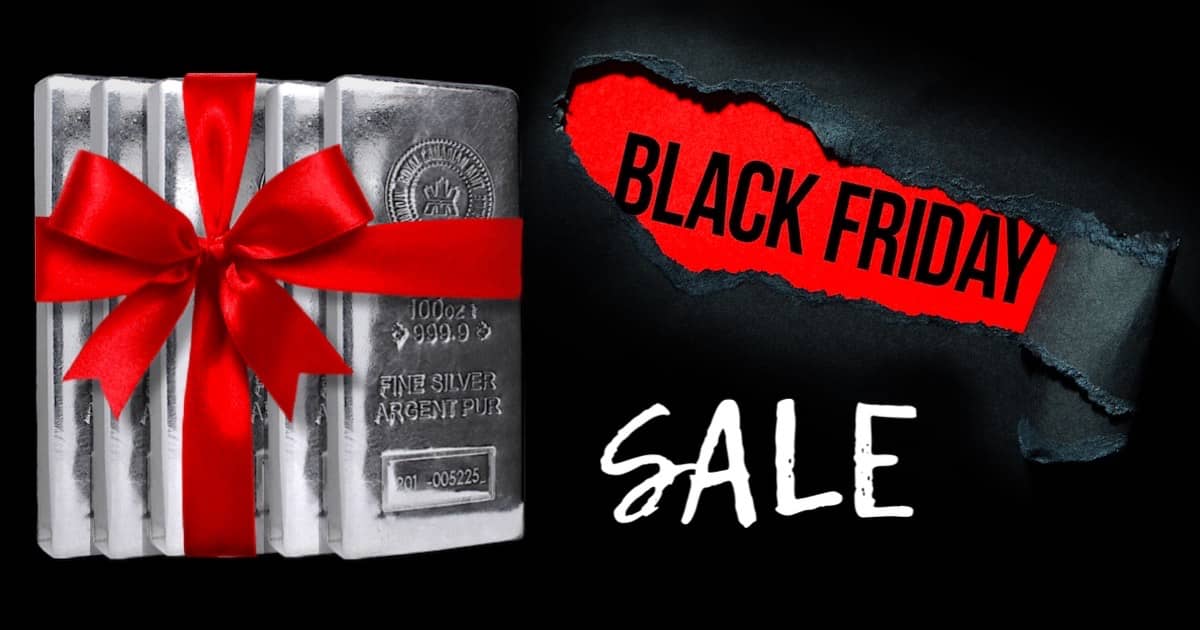 Did you know that the term Black Friday was first used in 1869? Two investors called Gould and Fisk drove up the price of gold and caused a market crash that resulted in prices falling 20%.

Of course, today Black Friday is what we call the Friday after Thanksgiving, and it marks the official beginning of the Christmas shopping season. This year, it falls on November 27th.

If you still haven’t decided what to get on Black Friday, you still have a bit of time left to think about it. Have you, perhaps, considered investing money into something?

As it turns out, the holiday season is an auspicious time for investments, especially gold and silver. Gold has been doing really well this year, despite the ongoing global pandemic and a looming economic crisis.

Pandemic and crisis - events that have a devastating effect on many things, but not gold. And this isn’t a surprise, it’s rather typical for gold. Throughout history, gold has flourished amid calamities as other investments, like stock and bonds, plummeted.

Gold is one of the rare tangible assets that have a constant nature, and although it sees its ups and downs on a daily basis, gold is doing just fine in the long run. Sometimes even more than fine, like now - in the middle of a pandemic - it’s thriving.

The same can be said for palladium. The fact that demand far supersedes supply makes palladium ‘the most precious’ precious metal on the market.

Silver is another good choice for a Black Friday investment. It’s had a good year but it is, however, a lot more volatile than gold, so if you decide to go with silver, be prepared for the changes in the price.

As an individual investor, the best way for you to invest money in precious metals this Black Friday is through bullion. Bullion is any of the four precious metals in the form of coins and bars. Investors mostly go with gold and silver bullion, as palladium is harder to find and very volatile, and platinum is the only one of the four metals that hasn’t had that good of a year.

The good news is that there’s a sea of options when it comes to gold and silver bullion, so you can have your pick. And at Pacific Precious Metals, you can now get it for the lowest prices per ounce above spot. Let’s check it out!

Don’t miss the opportunity to get some of the most beautiful gold bars and coins this Black Friday. Gold makes a stable and profitable investment, and now is your chance to get your hands on it!

Our number one choice is definitely one of the most iconic gold coins there is - the American Gold Eagle. Although this is a 22K coin, meaning it’s not pure gold, it’s still a valuable investment and interestingly enough, it’s the only 22K coin that’s IRA eligible. Do you see how special the American Gold Eagle is?

The Gold Eagle was first produced in 1986 by the US mint. This is a 1oz coin, but It’s also made in three other sizes: ½ oz, ¼ oz, and 1/10 oz. The sizes actually refer to the weight of gold in the coin, so the coin actually weigh more than the “stamped” weight on them given that silver and copper are added to make the coin 22k and more durable.

The design is nothing short of spectacular. The obverse of the coin depicts none other than Lady Liberty. Her full-length figure is shown as she holds a torch in her right hand and an olive branch in her left, and the Capitol building can be seen in the background.

The reverse shows an image of an American eagle, the national symbol of freedom. The male eagle is shown as it flies above a nest containing the female eagle and their hatchlings.

This magnificent coin can now be found at a special price as low as $99.00 per ounce above spot.

Another incredible coin produced by the US mint is the American Gold Buffalo. Unlike the Gold Eagle, this one is a 24K gold coin. This means it’s made to a fineness of 9999, which means it’s at least 99.99% pure gold.

The Gold Buffalo was first minted in 2006 because the US mint needed a 24K pure gold coin to compete with the 24K Canadian Gold Maple Leaf and the 24K Austrian Gold Philharmonic.

While it was made in other sizes a few times, today the Gold Buffalo is only produced in one size, and that’s the 1oz.

The coin uses the same famous design that appeared on the American Buffalo Nickel in 1913. The obverse shows a picture of an indigenous tribal figure with a feather woven into his braided hair. The reverse depicts the American Buffalo and the weight and fineness of the coin.

The American Gold Buffalo is one of the most unique and recognizable coins and it can be found at a price as low as $110.00 per ounce above spot.

As you know, silver is a lot more affordable than gold, so let’s see what are the best options if you want to make a profitable silver investment.

The American Silver Eagle was first minted in 1986, the same year as the Gold Eagle. Although the two coins share a similar design, they’re somewhat different. The most obvious difference is, of course, that this one is made of silver and a 999 fine silver for that matter.

This one’s also a very patriotic coin. It depicts the Walking Liberty design on the obverse - the famous image of Lady Liberty as she is walking towards the sun cloaked in the US flag. The reverse shows the American Eagle with the national heraldic shield. This beauty can be found for only $4.80 per ounce above spot.

Bars are also a terrific choice for bullion investments. One thing we have to recommend, though, is the larger RCM silver bar is becoming the most popular 100oz silver bar in the world.

This silver bar by the Royal Canadian Mint is the perfect example of a liquid bar that makes a good investment. It’s a 100oz bar made to a fineness of 9999, which is kind of unusual since most of them are made with 999 fineness only. Pacific Precious Metals offers you this beautiful bar for a price as low as $1.99 per ounce above spot.